The Boston Celtics 107-93 loss to the Philadelphia 76’ers was a tough start to the season. Here are my random thoughts on the game.

The Boston Celtics 107-93 loss to Philadelphia in their season opener obviously wasn’t a great start to the season. Here are some random thoughts on the game. 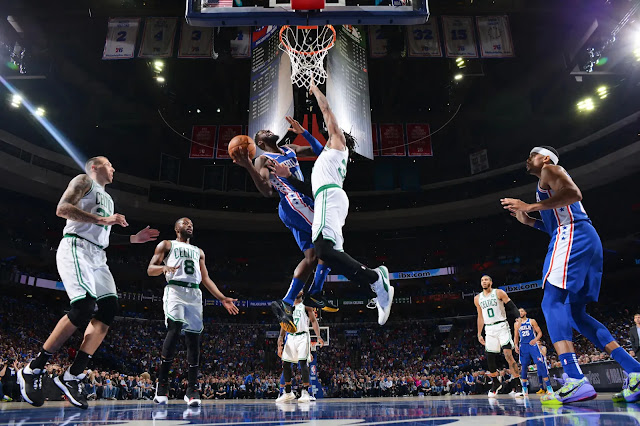 Gordon was in the game for 35 minutes and came away with a team-high 25 points, along with five rebounds, two assists and only one turnover. He hit his shots from all over the court but took no 3-pointers. He was 8-of-15 on field goals and 9-of-11 from the free throw line. But most of all, he looked smooth and confident on the court. He was the one most-responsible for keeping the Celtics in the game in the second half.

Boston had no answer for Ben Simmons

Simmons looked virtually unstoppable out there. He flirted with a triple-double with a line of 24 points, eight rebounds and nine assists, while shooting 68.8% from the field. How about 3-pointers, you may ask? Please – zero, of course. He drove the lane at will – scoring, passing off or drawing a foul. Brad Stevens even tried Semi Ojeleye on him. Nothing worked.

Kemba Walker’s game was off

Maybe it was season-opener jitters on the road with a new team, but Kemba just didn’t look like what we saw in preseason play. He scored 12 points, had two rebounds and two assists – but miscued for three turnovers. His shooting was way off – hitting 22% on field goals and 17% on treys. I have no doubt that his jitters will be gone by the second game of the season.

The 76’ers are a tough team to score on

The Celtics couldn’t hit anything against Philly. They shot a horrific 37% from the field, 27% on 3-pointers and 59% on free throws. Credit the 76’ers rigid defense for that. Getting a bucket against them is a tough assignment. The Celtics were throwing up clunkers for most of the game.

Kanter did some damage on the offensive end, scoring 12 points on 5-of-8 from the field. He also took down six rebounds, three of them off the offensive glass. But he seemed lost on defense in this one. Hopefully, that will change.

Brad Stevens gave 12 players a run in the game

Brad got 12 of his guys on the court, including rookies Carsen Edwards and Grant Williams. C-4 looked tentative out there but did manage to hit a smooth 3-point shot off a screen towards the end of the game.

What happened to the rebounding edge the Celts were supposed to have?

If there was a rebounding edge in this game, it belonged to the 76’ers. Philly out-rebounded Boston 62-41. The good news is that Jayson Tatum had a team-high 10 boards, with fellow Jay Team member, Jaylen Brown, coming in second with seven. Both have improved their rebounding.

Jayson Tatum was forcing some shots and missing them

Jayson was definitely forcing his offense, and the 76’ers tough defense was making him pay. Tatum was 8-of-22 from the field, but he was solid on 3-pointers, hitting 4-of-8.

Rob still seemed somewhat unsure of himself last night in his 10 minutes of playing time, but he definitely keeps getting better. He had five points on 2-of-4 on field goals – grabbed three rebounds – while adding one assist, one steal and one block. He should be looking at significant minutes off the bench as the season progresses.

With the Celtics now 0-1 for the season, they next take on the Toronto Raptors at TD Garden on Friday. I expect the maladies we witnessed last night to be mostly cured. But the center-spot dilemma remains in question.

Boston Celtics: Some guys are missed, & some are not

As I often do, I found myself looking at the Boston Celtics schedule, thinking about the games played and the games ahead and it really struck me...

Boston Celtics: A week in review

A week of the 2019-2020 season is in the books for the Boston Celtics and it shows nothing but promise. There were many running around in the social...

Boston Celtics: Rebounding woes for the Celtics this season